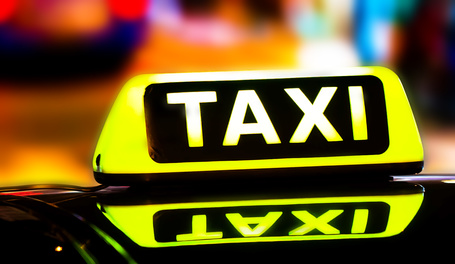 My most frightening road trips have been in taxis.  Not because the drivers were reckless, but because they were falling asleep behind the wheel. Like the time I landed in Mobile, Alabama late at night and needed to hire a taxi to take me to a conference on the coast. The driver was friendly and perky while we left the aerodrome. But as we rolled past the bright lights of the airport and out into the quiet rural drive, his energy fell fast. I could see his eyes blinking more slowly and his head beginning to nod. So I kicked into fatigue countermeasure mode and began incessantly engaging him in conversation. He stayed awake and we arrived at the hotel in one piece. As I crawled into bed an hour later, I hoped the driver would be safe as he finished his shift driving through the circadian trough.

The other scary ride that sticks in my mind was in Western Canada. It was about 14:30, post-lunch dip time for some, including me. I had just finished a presentation and was in the taxi on my way back to the hotel. The quiet rural roadway and soft, low pitched rumble of the winter tires put me into nap mode almost instantly. On one of my head nods, I looked up and to the left just in time to see a fully loaded gravel truck and feel my taxi aggressively jerk to the right. The truck’s horn blasting as the separation between the two vehicles grew and my driver’s voice burst open to say “Did you see that guy?”. It was a cover up, we were clearly over the centreline. My driver had succumbed to the same post-lunch dip as I had.

Although there are hours of service regulations for commercial vehicle drivers in many countries, they don’t often apply to taxi drivers. The vehicles they drive don’t meet the weight or passenger capacity limits of the regulations[1]. It is time for this to change. The not so-taxi-taxi company, Uber, is setting the trend in Canada. Last week they announced that a new feature on the app will force their drivers to take a 6 hour break after working for 12 straight hours[2].

It is a step in the right direction because the new feature is raising awareness about the risks of fatigued driving. It might even curb Uber drivers like one of my Friday night chauffeurs who, in one sentence, cited stats like “26% of all fatal and injury crashes are estimated to be related to fatigued driving”[3] and “167,000 Ontario drivers have been involved in at least one crash due to fatigued or drowsy driving”[4] and then, in the next sentence, tells me he drives for at least 18 hours a day!